Mission Statement: Mount St. Francis is a retreat centre nestled in the foothills of the Rocky Mountains where all are welcome in the name of Christ. The Franciscan Friars, inspired by the vision and example of Saints Francis and Clare of Assisi, in collaboration with the Roman Catholic Diocese of Calgary and many other loyal supporters, have served in this spiritual centre of peace, healing and prayer since its foundation in 1949. Mount St. Francis Retreat Centre is a sponsored ministry of the Franciscans of Canada. For more information, see www.fransciscanfriars.ca. 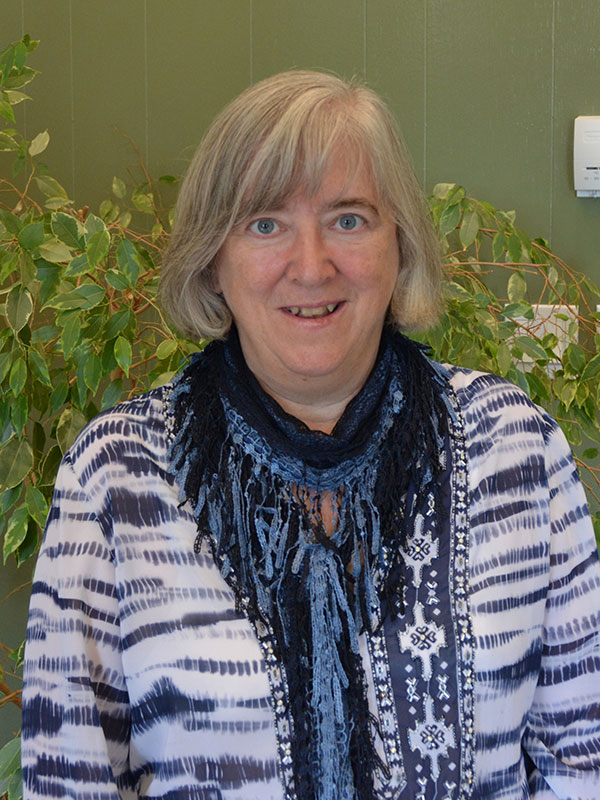 Susan Campbell was appointed the Director of Mount St. Francis in 2015. Born in Edmonton, she grew up in various parts of Canada and the U.S. She has a MTh. and M.A. Religious Studies. She completed the Spiritual Direction Training Program from the F.C.J. Centre in 2017. Before coming to the Mount, she served for 35 years in both parish and diocesan ministry in adult faith formation. She is also a trainer for Returning to Spirit, an organization initiated to heal the legacy of the Indian Residential Schools in Canada. A single lay woman, she provides spiritual direction and listens to 5th steps. “Retreat ministry, for me, is a privileged place to encounter God’s deep desire to touch our lives and hearts.” 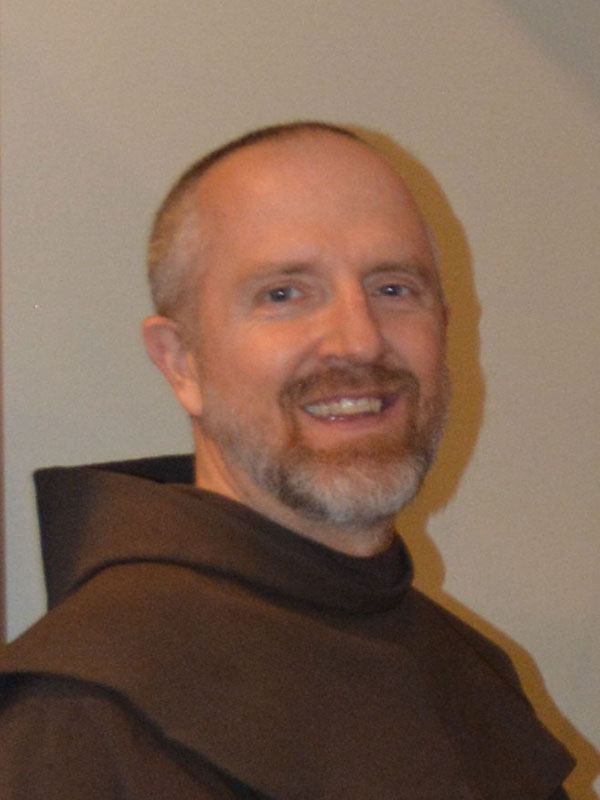 Father Dan Gurnick, OFM. I grew up on an acreage near Rocky Mountain House, AB, with my parents Leslie and Edward, an older sister Caroline and a younger brother Michael. After high school, I did many different types of works such as: sawmill worker, oil patch worker, paintball field owner/operator, landlord, construction worker and support worker for the mentally disabled. I received an Architectural technology diploma from the Northern Alberta Institute of Technology. Despite all these occupations and architectural diploma my heart longed for something different. After studying for the diocese of Edmonton for one year and a trip to Peru, I found my self on the doorstep of the Franciscans of Canada. I was in Franciscan formation and studies for six years before making my solemn profession in August 2009. In January 2010, I was ordained a priest. In August 2016, I moved to Mount St. Francis and joined the retreat team. I play music and speak at Catholic schools, assist young adults with vocational discernment, assist with the Mount’s maintenance, and journey with people in the twelve-step program. I enjoy weight training, hiking, gardening, snowboarding, and skiing.

Shalom World invited me to offer a talk during the 2020 Advent Season.  A couple months later, they asked me to do a 20 talk ‘Fear Not’ Lenten series.  After the series ended my Mom requested a written copy of the talks, which I did not have.  When Alice Murray sent an email about writing the talks into a book, I immediately thought of my Mom’s request.

I am thankful to Shalom World Television, Alice Murray, Friars Kevin Lynch, o.f.m. and Stephen Gattafoni, o.f.m., Caroline Brown and Tamara for their assistance in making this book possible.  I am also grateful for my family and the Franciscans of Canada who encouraged a lot of the experiences in the book.   I dedicate this book for readers to grow in their love for Christ and to share Christ’s love with others.  Proceeds from ‘Fear Not’ will go to various charitable organizations. 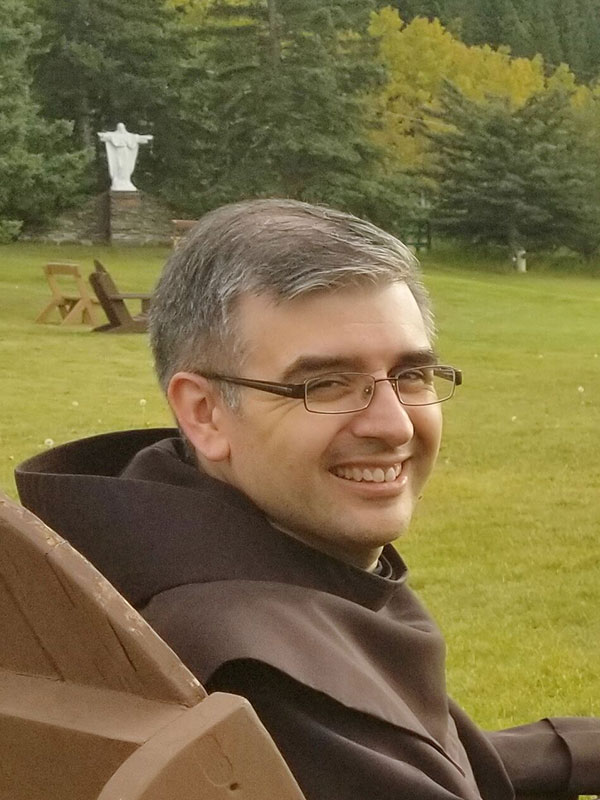 Friar Michael Perras, OFM was born and raised in Saskatchewan, the oldest of four. In a small rural community with plenty of extended family nearby he learned about service and community while growing up in his parent’s grocery store.

Brother Michael appreciates quiet moments of prayer to begin the day. He also enjoys tinkering in the chapel, Christmas, learning from the lives of the saints, being creative in the kitchen, a good run, a good song, setting a good table for celebrations, and lingering meals with good conversation. One of his greatest joys is being an uncle and a Godfather.

Prior to joining the Franciscans, he served in several communities as a Youth Minister and Pastoral Assistant. Brother Michael holds Certificates in Youth Ministry, Lay Ministry, Liturgical Studies, and Spiritual Direction along with a Bachelor of Theology degree. He is a non-ordained Franciscan Brother, solemnly professed since August 2019. 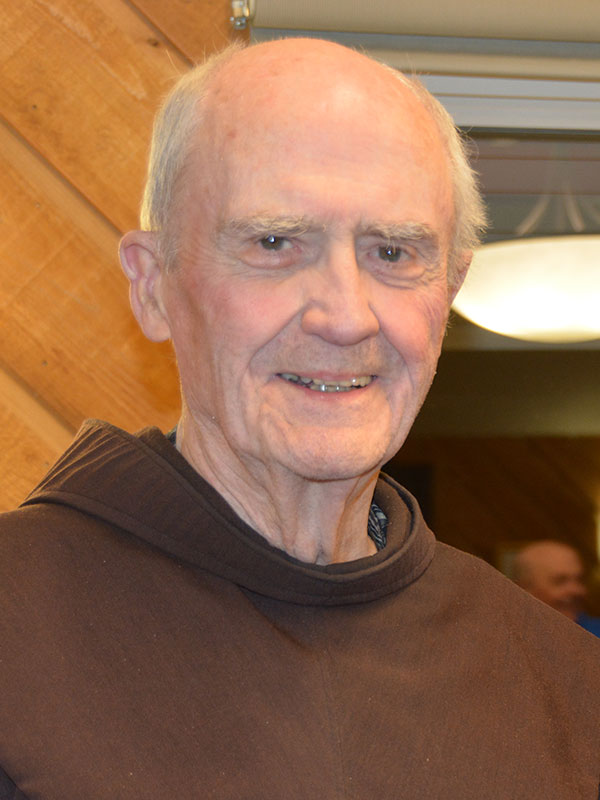 Father Kevin Lynch, OFM, was born in the Peace River Country of Northern Alberta (McLennan). Called to be a Franciscan as a young student at St. Anthony’s College, Edmonton, Alberta, he was ordained in 1962 after studies in Montreal and Ottawa. He taught senior high school science, math and religion with the Edmonton Catholic Schools before becoming Director of Religious Education for that District (1973-95) and served as Head of the Franciscans of Western Canada (1982-92).

Presently Kevin feels blessed to work in his own Order’s Retreat Centre in Cochrane, Alberta, in a ministry dear to his heart. Prior to 13 years at Mount St. Francis Retreat Centre (Cochrane) he spent 11 years in St. Michael’s Retreat Centre in Lumsden, Saskatchewan, where he chaired an inter-church board (Anglican, Evangelical Lutheran and Roman Catholic) that operated the Centre. Retreat ministry allows him the “soul space” to name the God of Jesus Christ in many ways. 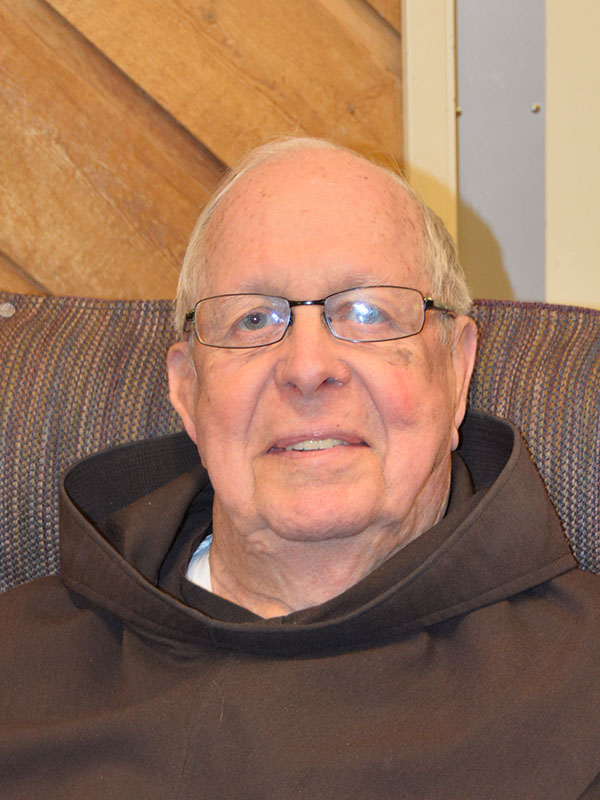 Father Robert Mitchell, OFM. Born in North Bay, Ontario, educated there and in Parry Sound, Ontario, Father Bob studied at the University of Western Ontario in London. For some of the years he was involved in teaching. Fr. Bob came west to join the Franciscans. He has served in retreat ministry both at Mount St. Francis and, St. Michael’s Retreat Centre in Lumsden, SK. He has been at the Mount since 1994. For many years he has been, and continues to be, a legendary preacher of retreats and spiritual director. 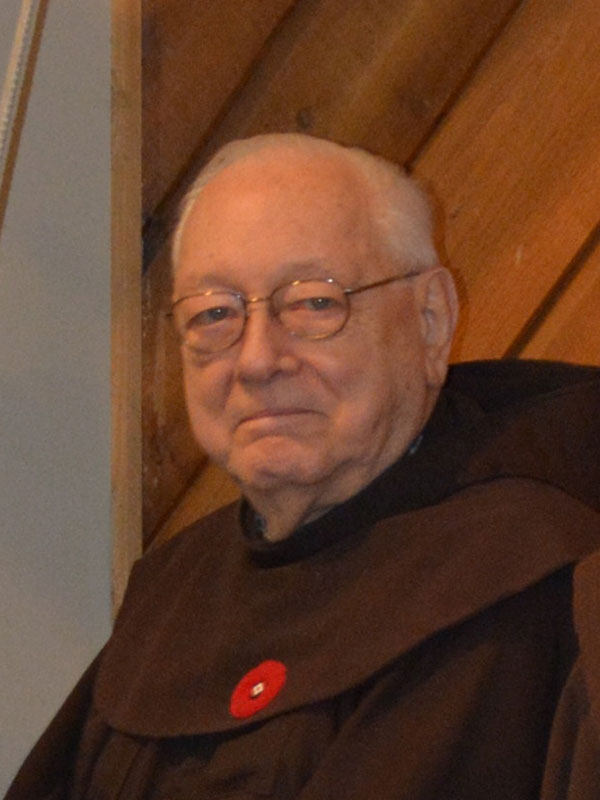 Father Louis Geelan, OFM. Born and raised in the south end of the Turner Valley oilfield. He met the Franciscans for the first time while attending the first men’s retreat at the newly constructed Mount St. Francis in August of 1949. He joined the Franciscans and was ordained in 1961 at St. Mary’s Cathedral in Calgary. Almost 60 years a priest, he has served in parishes and various ministries, including retreat work, across Western Canada. Fr. Louis’ classmate refers to him as “the most beloved friar in the land.” 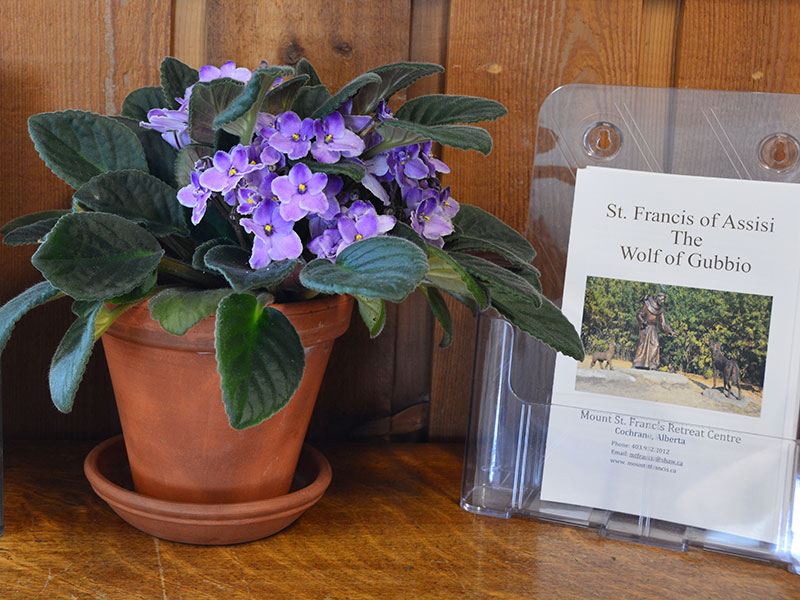 Deb is the Administrative Assistant and is responsible for Bookings and Reception. She comes with many years of office experience in the schools and the energy sector. She has been a staff member since 2011.

Tin is the accountant for Mount St. Francis. She also maintains our mailing lists and oversees the charitable giving records. She started in 2009 and brings many years experience in the financial field. 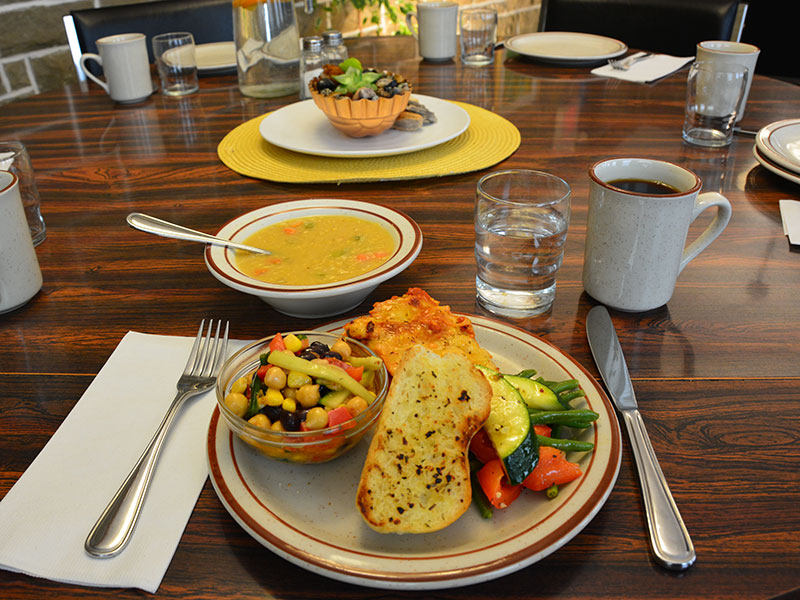 Jason is the head chef and oversees the kitchen staff. He obtained his Red Seal certification from the culinary program at SAIT. He comes with many years experience in the restaurant industry. He has been the lead in our kitchen since 2012.

Saveria has been at the Mount since 2006. In addition to cooking wonderful meals, she does much of the baking ensuring that there are homemade breads and goodies for all our retreats.

Paul joined the Mount in 2014. He, too, received his Red Seal certification from SAIT and brings many years experience in restaurants and professional kitchens.

Matthew assists in the kitchen and dining room during our retreats. 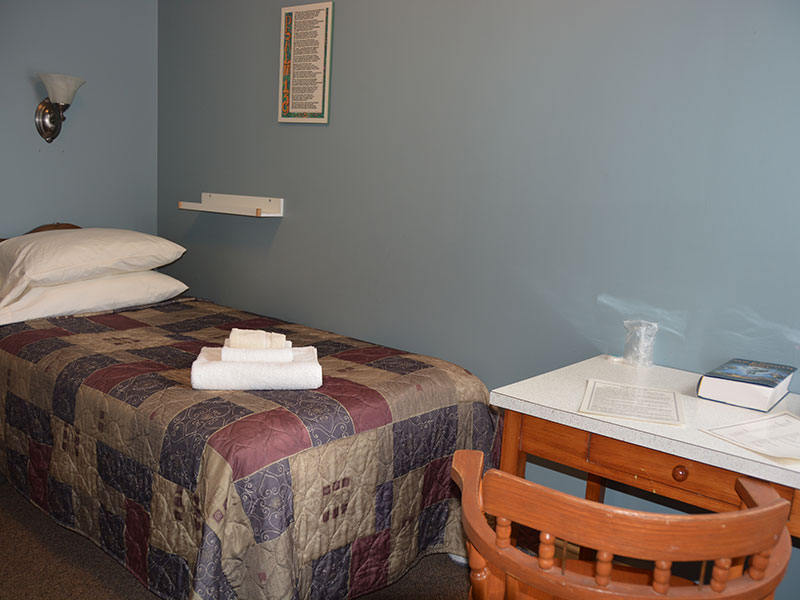 Johanne and Ruth have served in housekeeping for over a decade. They are very particular about keeping the rooms and facilities clean and tidy.

Herwynn has served as maintenance manager since 2016. He monitors all the mechanical systems of the plant and stays on top of the general repairs, maintenance and groundskeeping.