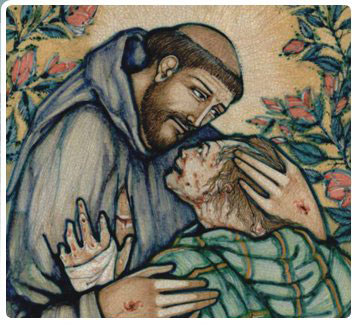 Any history of a Franciscan Retreat Centre like Mount St. Francis cannot properly begin without reference to the birth of St. Francis of Assisi in Umbria, Italy in 1182.

St. Francis, answered the call “To repair my house falling in ruins,” by first restoring the ruined church of St. Damian at the beginning of the thirteenth century, and then spending his life in a pattern of being a contemplative in action. Taking time away from the world; retreating to be quiet, to pray and to listen for the voice of God and then responding to that voice by preaching and living in community.

St. Francis founded one of the largest religious orders in the history of the Church; the Order of Friars Minor (Franciscans). Upon his death in 1226 there were thousands of followers desiring to follow the gospel pattern and imitate the poor crucified Christ. His close friend, Clare of Assisi formed the congregation known as The Poor Clares; a contemplative women’s order. She too focused on living the gospel. Their love for Christ inspired many lay people and so the Franciscan Secular Order was formed and continues to this day. Following St. Francis of Assisi’s ex-ample of humility and his passion for the gospel, Franciscans have since preached following the poor Christ the world over for some 800 plus years.

Here, on the other side of the globe, the plains of Alberta have been inhabited by vast herds of buffalo and the First Nations people who relied on them for their livelihood for centuries. The First Nations people first heard the message of Christ with the arrival of such pioneers as the Oblate missionaries. It was discovered that First Nations people had the same deep reverence for God’s hand in nature as St. Francis had. They, too, talked about Brother Sun, Sister Moon, Brother Fire, and Sister Water, and they had the same affinity for Mother Earth.

North of the Bow River, near what is now Cochrane, Alberta, the First Nations people known as the Stoney Nakoda (Iyarhe Nakoda) hunted along the foothills of the Rockies called a prominent hill “Manachaban” or the Big Hill. From it, they could look south across the plains or west to the Rocky Mountains. Today, the Big Hill is graced by the Stations of the Cross which overlook Mount St. Francis Retreat Centre.

The present site was originally owned by Mr. Charles Wellington Fisher, who purchased the land in 1907 and built the original sandstone house in 1908. Today, that house makes up an integral part of the retreat centre. Mr. Fisher’s family occupied the home until 1931, when it was sold to the McConachie family, and became the “Just Home Guest Ranch.” On March 10, 1949, the Franciscans purchased the property, in part. Mr. Clair J. Cote purchased the remaining land and very generously donated it to the Franciscans. The Friars built the first wing for retreatants and on August 15, 1949 gave their first retreat to the Calgary Diocesan clergy. Retreats for lay people began that same autumn. Friar Louis Geelan, presently a member of the Retreat Team, was on that first retreat. 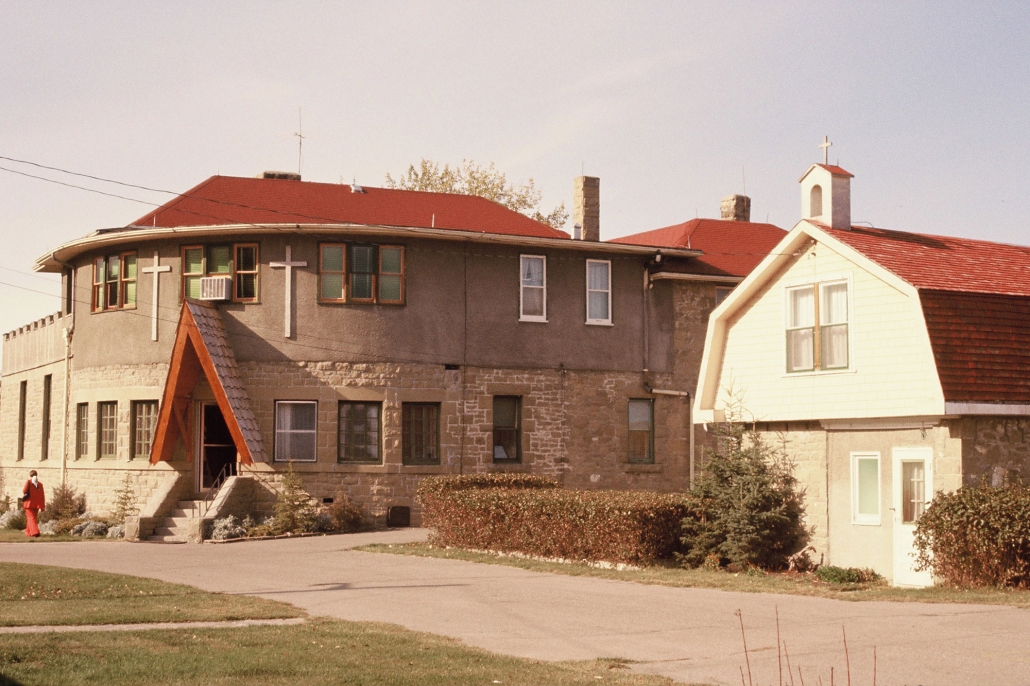 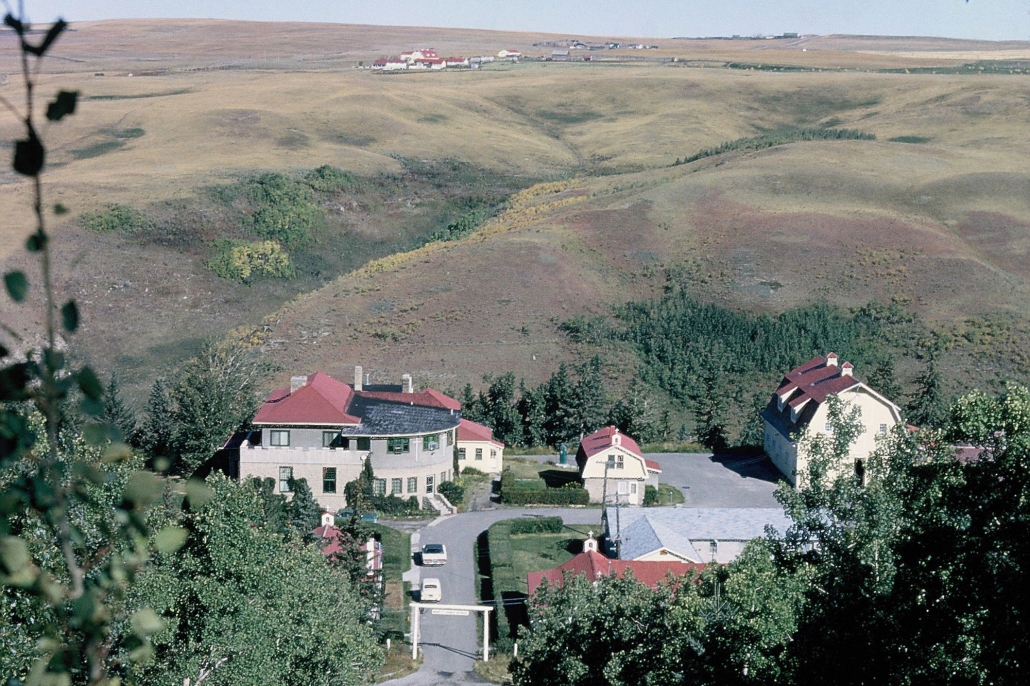 Father Timothy Gilker, OFM, was the first Retreat Director who served from 1949 to 1958 and again from 1965-1967. Mount St. Francis also operated a small scale farm with gardens and animals to provide food for the retreats. Other friars were retreat preachers and provided pastoral ministry to St. Mary’s Parish in Cochrane. The Sister’s of St. Elizabeth arrived in 1950 and served in the kitchen preparing meals for the retreatants and friars. They were also the housekeepers. They first stayed in the small carriage house (Lodge 3) before a new convent was built (now St. Elizabeth Place). The Sisters served for 50 years. As the numbers in their community diminished, they returned to Saskatchewan in 2000 and since that time a dedicated lay staff have served in the kitchen. 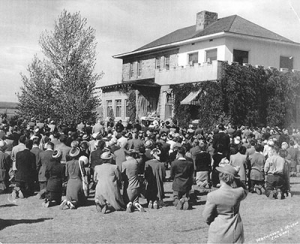 After Fr. Gilker, several friars served in turn as Retreat Director: Father’s Godfrey McSweeney, Gerald Desroches and Sebastian Drake, with other friars on the team in preaching the retreats. Fr. Cornelius (Fred) Williams became the Retreat Director in 1967 and held the position until 1979. In this period of time, inspired by the vision of the Second Vatican Council (1962-1965), many changes took place at the Mount, specifically in collaboration ministry models. The pioneering work of Sr. Helen Hengel of the Sisters of Charity of St. Louis as a member of the retreat team was followed by others from her community: Sr. Teresa Spence and Sr. Geraldine (Gerry) Hagel. During this time, the farm portion of the property was relinquished (1974) as there were fewer Friars that could oversee this work. The main corridor was completed in 1977 linking the sandstone house to the conference room and retreatants wing. This provided needed office space and a very contemplative view of the Rocky Mountains for retreatants, now able to sit in comfortable chairs in front of large picture windows. 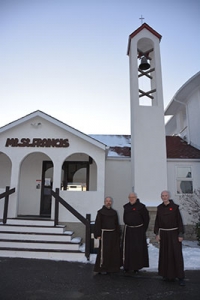 Fr. Paul Surette succeeded Fr. Fred and served as Retreat Director from 1979-1985. He was followed by Fr. Anthony Sebastian who hired a lay woman, Norline Johnson, who was professionally trained to serve on the retreat team with the other Friars, notably Fr. Lucien Kimble and Fr. Louis Geelan. This team served until 1995 when Fr. Brian Burns became the Director until 2004. Fr. Bob Mitchell joined the team in 1994, coming from Lumsden and bringing his wonderful skill as a retreat preacher and spiritual director. Soon after, a young married couple, Mariette and Kristoph Dobrowolski were also hired to complement the team and served until 2004. In this time period (2004-2005), Mount St. Francis was only able to offer day retreats due to staffing, water and building concerns. These repairs were financed by very generous benefactors and we were able to start limited overnight retreats again in 2005 under the direction of Fr. Stephen Gattafoni, who served as Retreat Director from 2004 to 2007. Brenda McAlpine joined the team as co-Director between 2006-2009 and helped to build a full complement of weekend and twilight retreats at the Mount. Brenda died in 2010 after a brief battle with cancer. The new bell tower was built in her honour and, in addition, extensive work was completed on the grounds, thanks again to many generous benefactors. 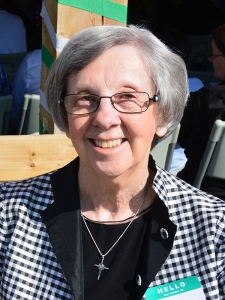 Fr. Kevin Lynch became the Retreat Director in 2007 until 2015. Fr’s Bob Mitchell, Stephen Gattafoni and Louis Geelan were also on the team. Sr. Gerry Hagel, SCSL, former Superior General of the St. Louis Sisters, joined the team in 2010 and remained in active ministry until just prior to her death in 2018. In 2015, Susan Campbell was hired as the Retreat Director, coming with many years of pastoral experience and theological training.